On December 11 in the HSE, with the participation of the International Laboratory for Study of World Order and New Regionalism, an open lecture was held by the professor of the University of Kent at Canterbury, Richard Sakwa, on the topic “Russia's Futures”.

Richard Sakwa is a leading research fellow of the International Laboratory on World Order Studies and the New Regionalism and an expert on Russian and European policy. He is an author of numerous books on Russian politics: “Russian politics and society (1993)”, “Soviet politics in perspective” (1998), “Putin: Russia's Choice (2004)”, “The Crisis of Russian Democracy: The Dual State, Factionalism and the Medvedev Succession” (2010), “Putin and the Oligarch: The Khodorkovsky-Yukos Affair” (2014), “Russia Against the Rest: The Post-Cold War Crisis of World Order” (2017), “Russia’s Futures” (2019) and etc. Professor's lecture provided students and researchers with information about the Russian political and economic systems, Russia's ideology, Russia’s place in the system of international relations as well as Russia's challenges in the future. According to Richard Sakwa, Russia will have different futures, because it had different pasts. The researcher notes that the fate of Russia is inextricably linked with the broader developments in global political practices. During the lecture, the researcher paid special attention to his new book entitled “Russia's Futures”. In this book, the author draws attention to the fundamental problems currently facing Russia and discusses different scenarios for the future of Russia. One of Russia's problems is related to its economic policy. The author notes that Russia today has clear symptoms of economic dysfunction that can only be resolved through systemic reform. The book “Russia’s Futures” is the result of many years of research by Richard Sakwa and is intended not only for experts on Russia's politics but also for all individuals who want to receive information about Russian politics.

Richard Sakwa characterizes Russia as a state that supports multipolarity in international relations. According to the professor, Russia is at the head of an anti-hegemonic alignment, in which its relative weakness is compensated for by alignment with China, the Shanghai Cooperation Organisation, the BRICS group, and a whole set of anti-hegemonic actors. 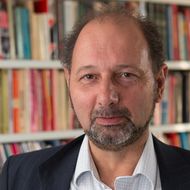